In this post, I’ll show how we can use Julia and my multi-scale image decomposition library, Pyramids.jl, to implement Phase-Based Frame Interpolation for Video, an algorithm from CVPR 2015. This assumes some familiarity with complex steerable pyramids.

The paper describes an algorithm for interpolating between video frames, with applications from smoother slow-motion video to creative animation effects.

The algorithm itself is fairly straightforward. First, two complex steerable pyramids are constructed from the two reference frames. The method rests on two observations: 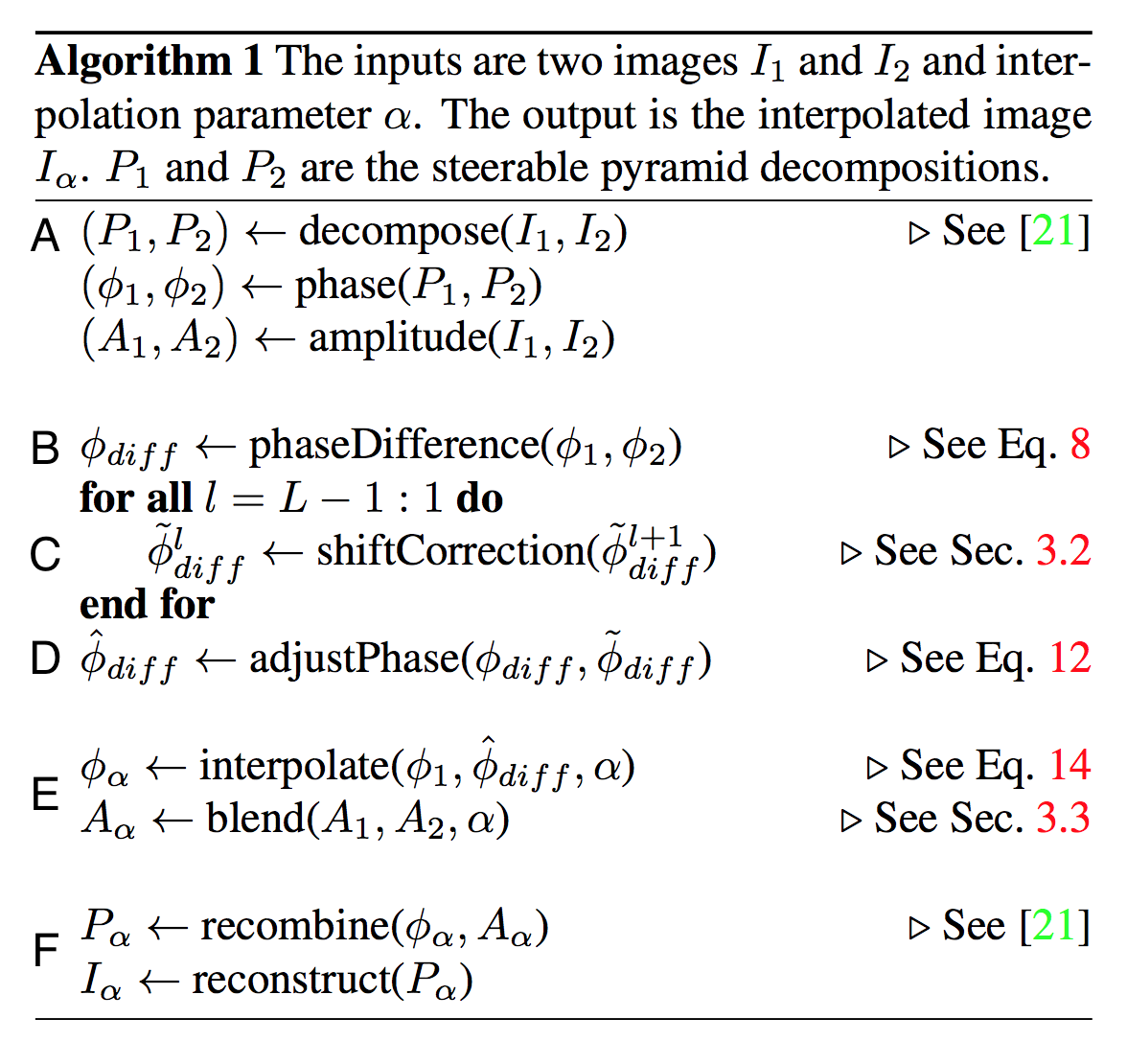 In the “adjustPhase” step, consistency is insured between the interpolated phase and the phase of the reference frames (i.e., with α = 1, we should compute exactly the second reference frame.) This is done by adding a multiple of 2π to the original phase that most closely matches the corrected phase from the previous step.

In this way, the algorithm computes a consistent, unwrapped phase for each pixel. Now, we can simply interpolate phase and magnitude between the two frames, and reconstruct the image from the interpolated pyramid.

Now, let’s look at how to implement this algorithm in Julia. First, we will include the libraries we will need, define a new pyramid type that we will use to denote a pyramid containing image phase alone.

Next, we must load the images that we will be interpolating between (“frame_0.jpg” and “frame_1.jpg”), extract just the luminance component by converting the image to Lab color space and generate a complex steerable pyramid using the ImagePyramid constructor. Note that unlike traditional complex steerable pyramids, we are using a scale factor > 0.5, which results in a significantly over complete basis. This has been shown to produce significantly higher quality results for this and similar algorithms.

This accomplishes the step I have labeled “A” in the algorithm overview above.

The next significant step, labeled “B” simply requires computing the difference in phase between each pixel of two pyramids. This looks like the following:

This simply iterates through each level of the two input pyramids, and create a third pyramid (of type PhasePyramid) which stores the difference in phase.

The next step is labeled “C,” and is the most significant part of the algorithm. Here, we will use phase information from larger spatial scales of the image in order to resolve phase ambiguities at higher levels. Let’s take a look.

With the new, unwrapped phase difference computed, we are now able to compute the interpolated complex steerable pyramid. The pyramid amplitudes are interpolated linearly between the two pyramids, and the phase is of course the original phase + alpha * the unwrapped phase difference. To avoid ghosting, a single high frequency phase residual is used only.

Finally, we produce our output image. Notice that only the luminance channel uses the phase based interpolation method – simpler, significantly faster linear interpolation suffices for the chrominance channels, as our visual system is far less sensitive to issues like ghosting and sharpness loss in these channels.

So, does this algorithm work? What do the results look like? To start, let’s look at naive (linear) interpolation between two test frames:

Notice the significant ghosting in the interpolated frame. Phase-based interpolation produces this result:

A significant improvement! (Though notice that there are some low-frequency artifacts visible in the interpolated frame.) 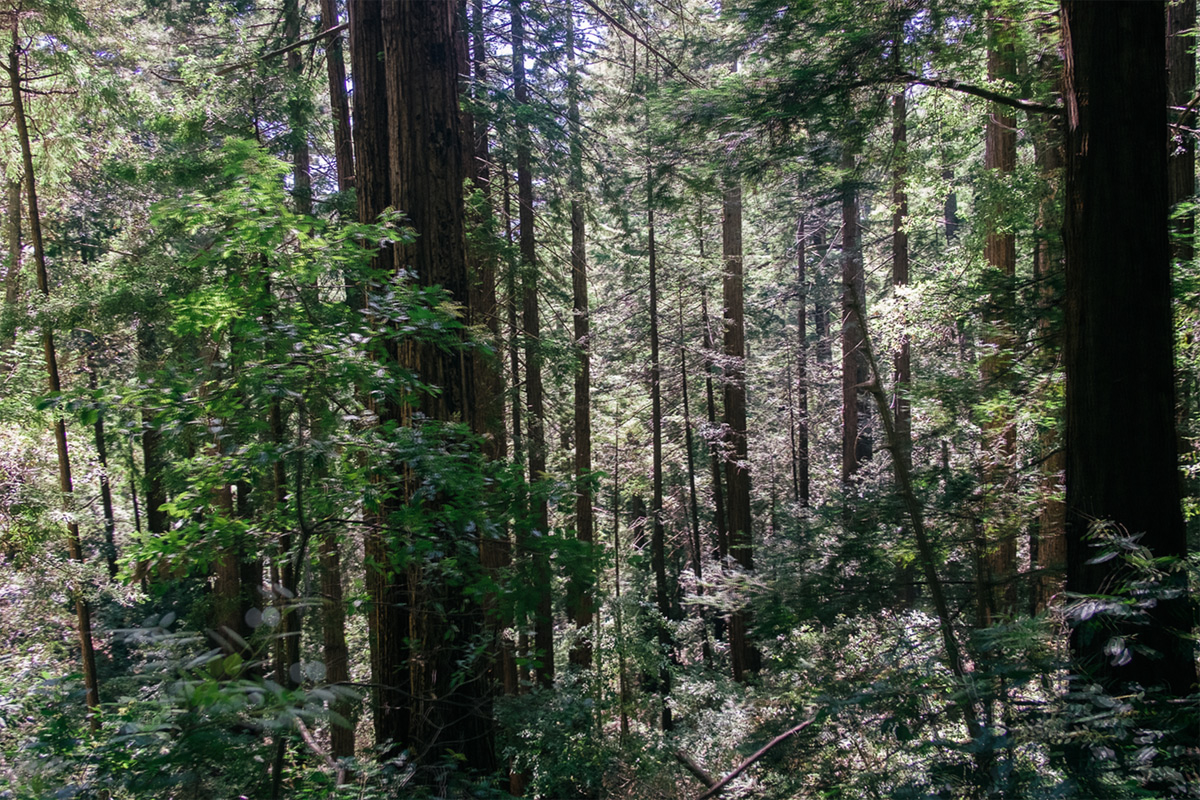 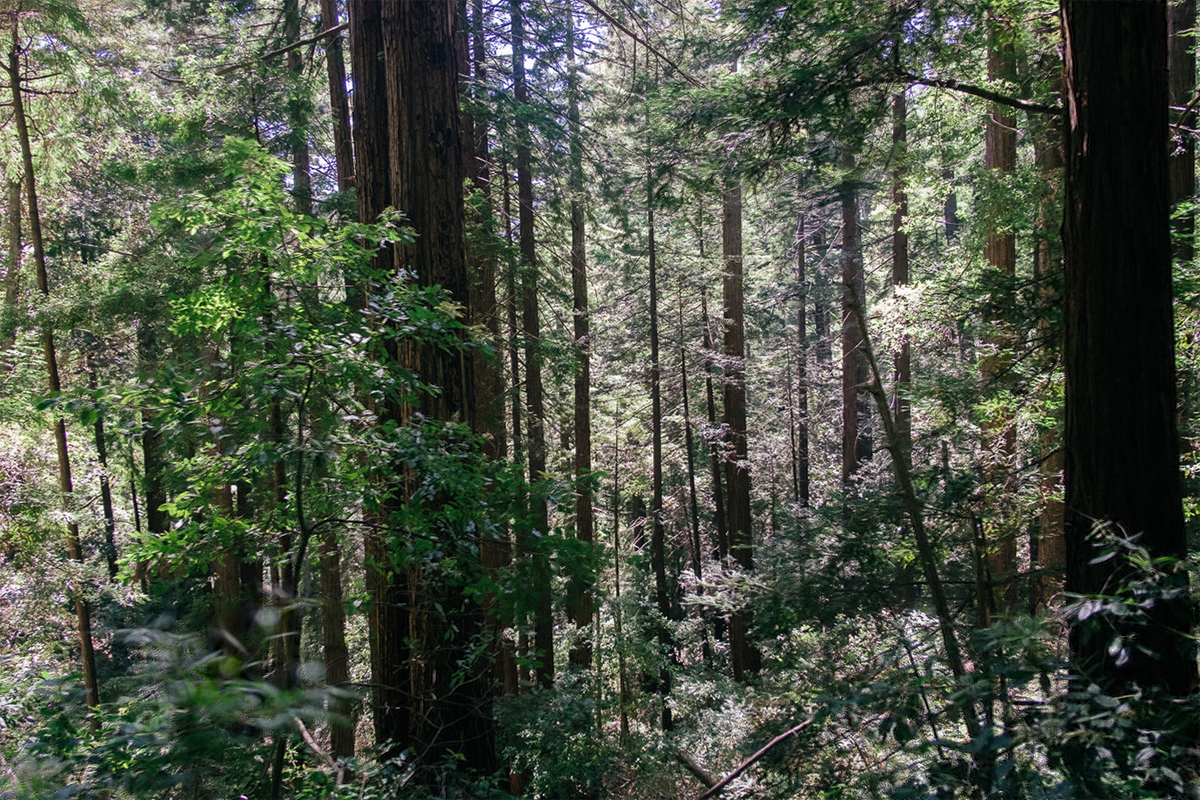 Again, phase-based was much more successful at preserving structure and sharpness without ghosting. Notice especially the branches in the center-left and bottom-right.

However, also notice that the phase-based algorithm performs poorly in the bottom-left, where the movement of the branches was too large for adequate phase recovery. Still, even in this case, the blurring artifacts are arguably less severe than the ghosting visible in the linear implementation.

n.b. This is a personal project, and all code is released for research purposes only. Contact The Disney Company for more information about licensing the IP contained in the linked CVPR paper.