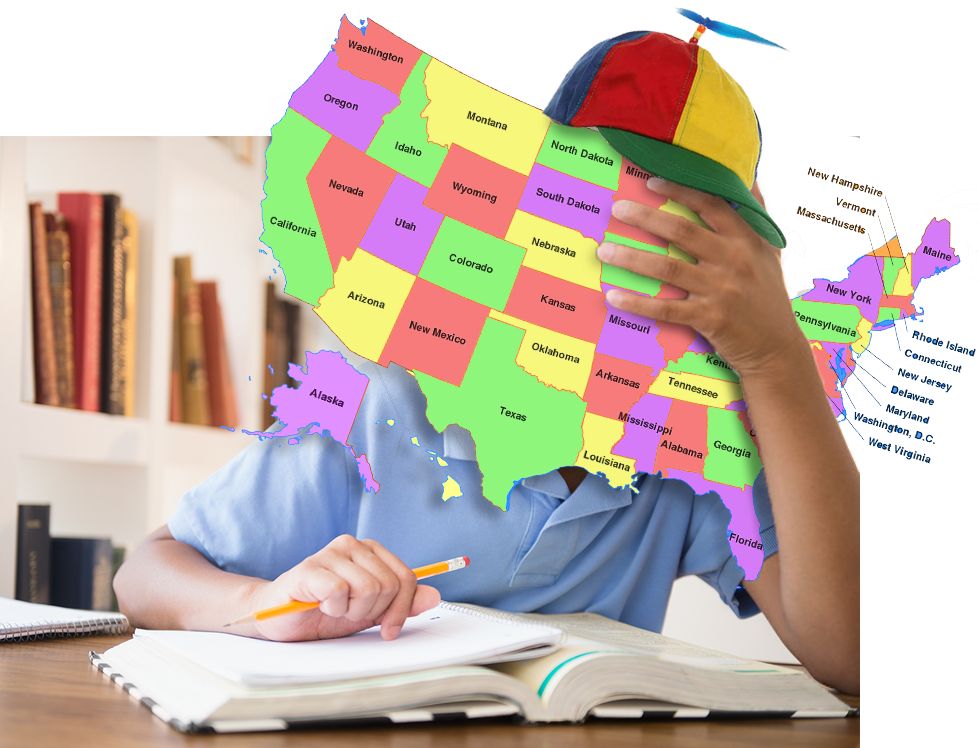 In San Francisco, the result of the 2016 election hit my community hard. We all felt we understood the political, cultural, and economic pressures the United States was facing. Clearly, we did not. At least, not sufficiently.

In the aftermath, like people all over the country, I met groups of strangers and friends in living rooms and parks. Together, we shared our fears and our hopes, read and discussed history, and planned next steps. Through this, a common theme emerged – a lack of understanding of what the people who voted for Trump were feeling that motivated them to do so. We’d all read thinkpieces on trade and the economic trajectory of the working class, and we’d all seen sensationalistic interviews with the most outspoken individuals at a Trump rally. But what was in between? I certainly didn’t know.

And yet, as I was lamenting my geographic disconnect from a huge part of America, an opportunity presented itself. I would be traveling soon — to Phoenix and to the Cleveland suburbs, for Thanksgiving and Christmas — both areas that helped launch Trump to victory. Maybe I could use holiday travel as a way to connect and listen outside of my geographic bubble. Maybe others could too.

It was with that motivation that Alison Malouf and I created Homework for US, a simple idea with a simple webpage meant to encourage other people to commit and share. In a public place, offer a small bite to eat in exchange for hearing about a stranger’s hope for their local community. We hoped that by offering food, we can build camaraderie and comfort, and that by framing our question in the context of a hope, we could spur a productive and positive conversation. 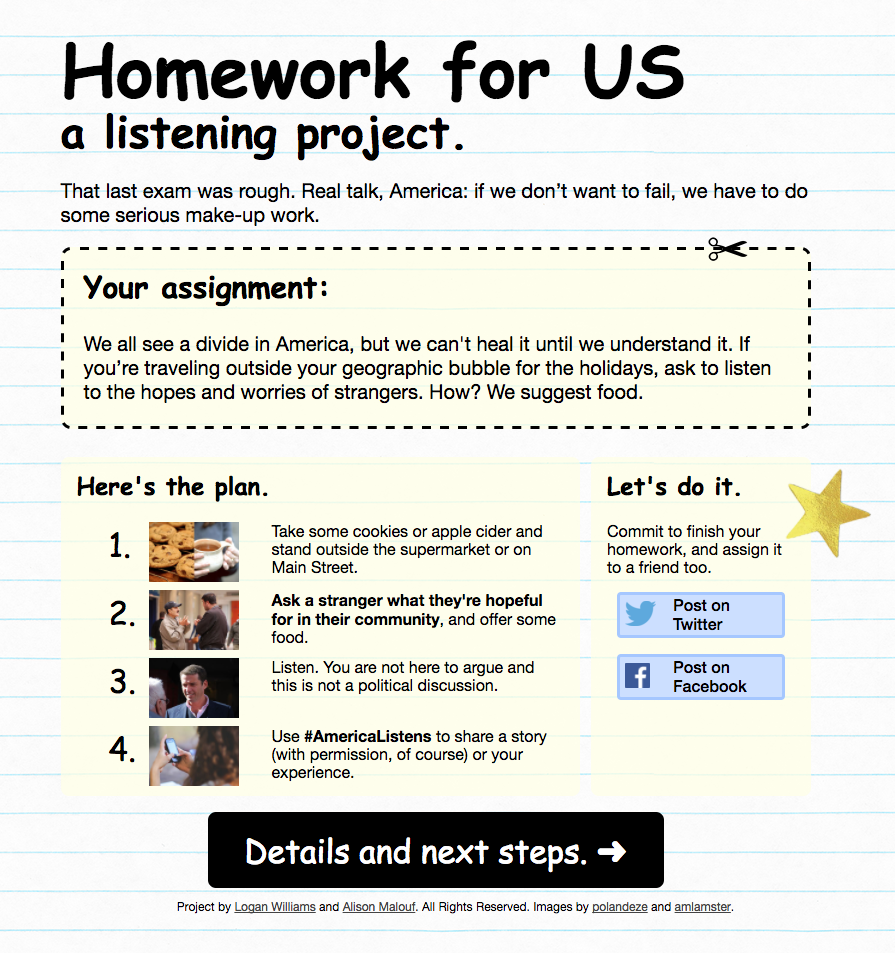 “My father bought the house I live in in 1954. I’ve been here a long time. And you know, a lot of these older neighborhoods, they just don’t have sidewalks. There’s a sidewalk there, but not here, and why? I just want a place to walk my dog. In the parking garage, below, where I parked, there’s no where to walk. Some people, they drive so fast.” - Joyce in Phoenix, Arizona

The activity itself was fairly successful. I enjoyed talking to strangers in Phoenix, and for the most part, they seemed happy to talk as well. Asking about hopes for a community forced a visualization process that got people thinking about realizable changes that someone, maybe even themselves, could make to their immediate environment. Finally, the interaction promoted more sympathetic encounters with people in the urban environment. Maybe it’s not best to keep our headphones in, stare straight ahead, and keep walking. Maybe we could learn things from each other.

“I wish the sheriff and police success.”

“Have there been issues with that lately?”

“You know, all the time. I report things to them, and they don’t believe me. They make fun of me, talk out the side of their mouths. Everyone runs red lights. Look, there they go!” - Tyler, homeless in Phoenix, Arizona

Quite frankly, the project failed in the sense that no one else was willing to do it. I had intended the Thanksgiving push as a kind of “soft launch,” and had hoped that enthusiasm among my direct social network would result in other people taking the plunge and trying it out. This didn’t happen.

In retrospect, there are several reasons why this was difficult:

I’m not completely sure what to do about these reasons – both seem more like features than bugs, in my view.

A second failure was that the project wasn’t shared very much. A handful of shares on Facebook and Twitter, all within our existing social network. An issue that arose, though I don’t think it impacted the amount of sharing significantly, was that our chosen hashtag, “#AmericaListens,” turned out to have a conflict with another prolific poster, which intensified after launching our website.

Perhaps the project could be framed in a different way that would better encourage sharing, but I’m not sure what it might be. Do you have ideas? Let me know. 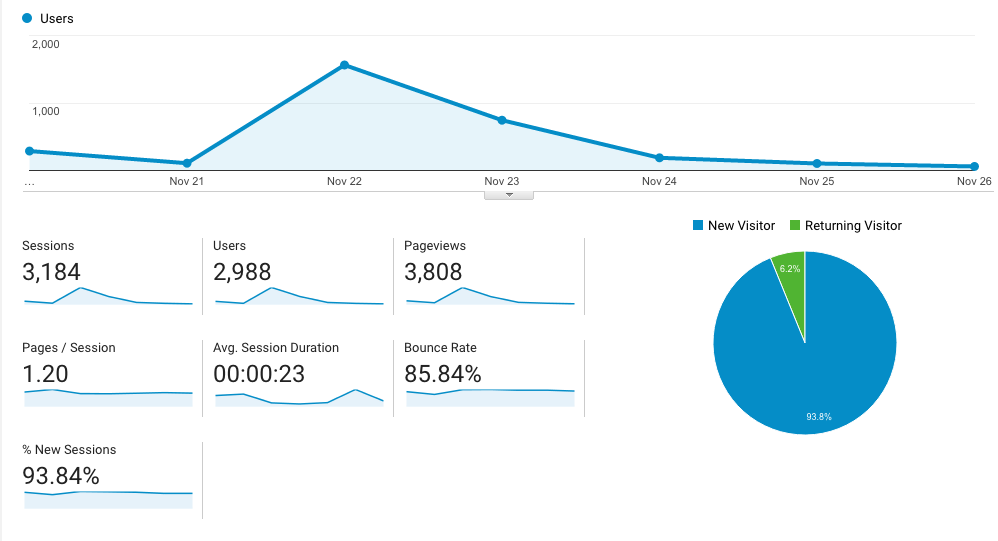 We had nearly 3,000 visitors over the few day period before Thanksgiving, about 14% of which clicked through to the “More Details” page. 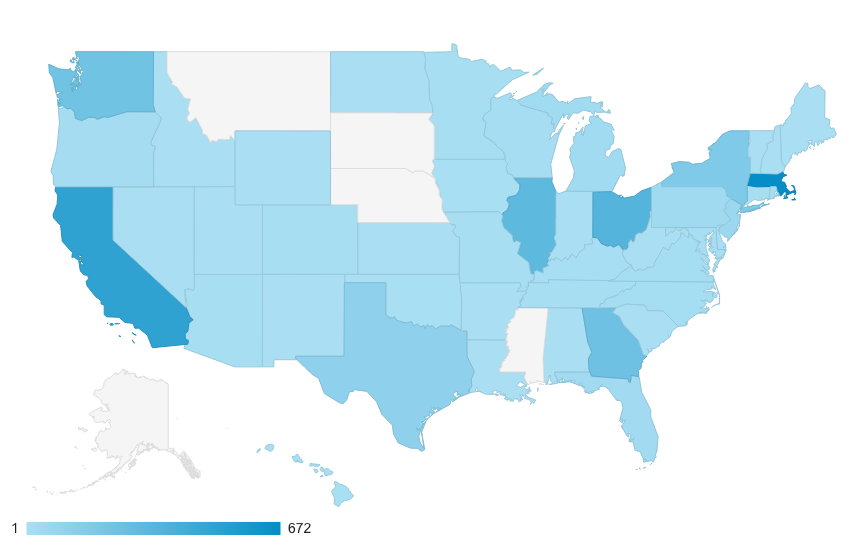 These visitors were scattered across the US though with some concentration in Massachusetts and California, due to our existing social networks being focused there. 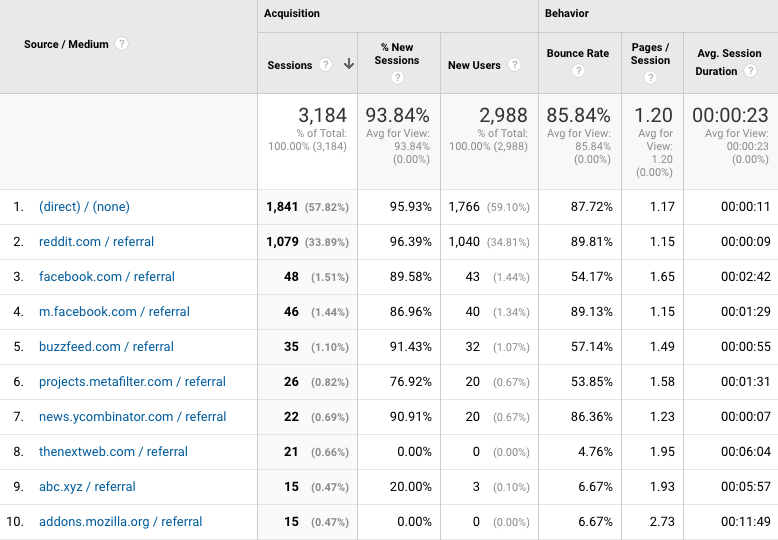 The referral data is perhaps the most illuminating. We see a large number of visitors from Reddit, a result of postings we made on a number of college subreddits, as many college students would be traveling from academically insulated bubbles to the scattered locations they came from over the Thanksgiving break. However, these Reddit users are not very engaged, with a high bounce rate, and an incredibly short 9 seconds spent on the website. I suspect that many of the “direct” visitors are also from Reddit, with a referral blocking extension. This advertising method was unsuccessful.

What can we do next?

“I want downtown to be more of a nightlife destination. We also need better homeless services.” - Michael, a valet in Phoenix, Arizona

For me personally, I’m looking forward to trying the activity in a new place, somewhere I’ve never been before – the suburbs of Cleveland, Ohio.

There are other people working on these kind of echo chamber breaking projects as well. My colleague Cathy Deng is devoting her time at the BuzzFeed Open Lab to making small interventions that encourage non-political interactions outside of the class bubbles we live in. Krishna Kaliannan of Escape Your Bubble is focusing more explicitly on the political viewpoints of the “other side” and Free Intelligent Conversation is trying to encourage more spontaneous discussion in the public realm.

If having conversations with people that you normally wouldn’t is an idea that excites you, do it! And then write about it. And then encourage others to do it too.

What else were people hopeful for?

“Infrastructure projects, I think we need more of those, put people to work.” - Ben in Phoenix, Arizona

“Unity! We all need to come together as a community, get on the same page.” - Tasha and Thomas in Phoenix, Arizona

“The crime to stop.”

“We live in Maryvale, so, yeah…” - Unknown in Phoenix, Arizona

“I’m hopeful I can be a good father to my son. He’s in Washington state. I got left behind.” - Abraham in Phoenix, Arizona

“Less violence, so my kids can play outside.” - Unknown in Phoenix, Arizona

“That people wake up and start paying attention to the environment.” - Mariah in Phoenix, Arizona

“I’m hopeful for the next four years.”

As I left Phoenix, I spent an hour sitting in the airport, watching CNN on the television at my gate. The airport is practically the only place I encounter TV news now, itself an example of the many ways my personal bubble manifests itself.

I found it difficult to watch. Current events and policy were not being discussed with facts, but with shouted opinions. Nothing was placed into a context that enabled any critical thought. We can talk about “fake news” and the decline of critical thinking skills, but if the most consumed news sources do not present content in a way that practices and reinforces those skills than progress will always be limited.

I agree, John. We need more civility in discourse. We clearly have a long ways to go.